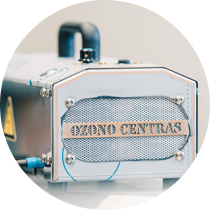 Ozone is a gas. And it consists of only one element – oxygen. Ozone can be imagined as a normal molecule O2 with a very nervous, active, reactive, irritated, energetic, and viable atom O1. It is active and reactive.

Ozone is a powerful antimicrobial substance of gaseous and aqueous condition, suitable for application in food industry. Molecular ozone or its fragmentation products quickly decontaminate microorganisms by reacting with intracellular enzymes, nuclear material and their cell membrane components, spore membranes or viral capsids. Applied in food industry, ozone is generated locally and quickly decomposes without leaving any residue. Ozone is suitable for decontamination of products, equipment, surfaces in contact with food and processing environment.

The basis for industrial ozone production – the abundant and inexhaustible resources of O2. Ozone (O3) is formed by transformation of atoms in oxygen molecules, when they are exposed to high-voltage electrical discharge. The product is a bluish pungent odour gas with strong oxidative properties. Ozone is formed by reacting free oxygen radicals with oxygen molecules and forming triatomic oxygen molecules. In addition to photochemical and electrical discharge methods, ozone can be produced by chemical, thermal, chemo-nuclear and electrolysis techniques. The most common commercially used in ozone’s production is the corona discharge method.

Two electrodes, high voltage and low voltage, separated by a special dielectric, provide a narrow discharge gap. Electrons, which have enough kinetic energy to split an oxygen molecule, encounter them, and an ozone molecule can be formed from each oxygen atom. If atmospheric air is released through an ozonator, 1–3% of ozone is produced; while using high-purity oxygen can be produced up to 16% of ozone. Consequently, the concentration of ozone cannot be raised above the point, when formation and decay rate is equal. Ozone is produced at the site of use, because it cannot be stored due to its spontaneous decomposition into oxygen atoms.